We’ve all been there. A new year dawns and you are not inspired by the creation starring back at you. Foxinni.com, and it’s many facelifts, has come to a stand still.

So with that and a change of hosts, this time totally free, let’s have a final look before putting it to bed. 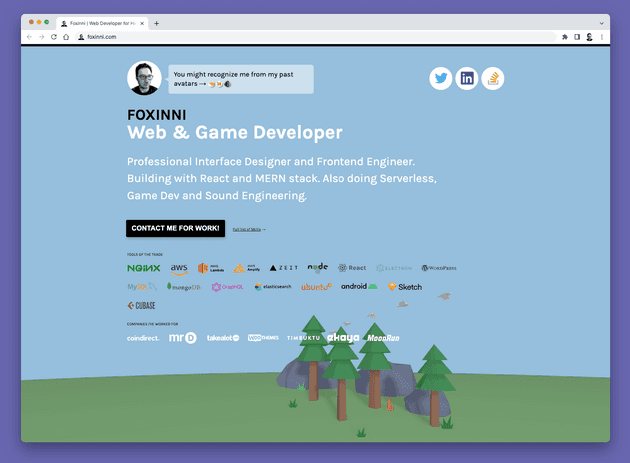 So much 3D, so little effect.

I don’t know if you noticed but the 2020 site had a massive 3D effect on it. So sublet you might not even know it was there it’s there. I was using Blender to export a low poly forest scene with trees, birds and even a fox to GLTF. Then imported it with ThreeJS and made it react to the mouse.

It took up the entire background of the webpage and would pivot around scene as the the mouse moves, adding quite a nice bit of depth to the page.

Mobile support was very low on this, and there are the obvious GPU limitations. Thusly I’m going to throw it away and start on something else.

Having previously hosted a pre-generated React build did not give me a whole lot of power over 404s. Many of my broken links were ending up on horrible 404 pages. It was also self-hosted and scratching around in NGINX hosting configs was never going to be fun long term. Very easy to break, very hard to remember. I mostly managed this via SFTP, but updates was not driven by CI. Boo :(

I believe the Gatsby solution will give me parmalinks via a folder structured CMS using markdown to create the pages that was landing on 404s as-well as letting me create a genuine 404 page to delight users who ended up in no-mans land.

So I’m going to try revive a type of blog (or note keeping) system for my website. It’s been around long enough and deserves to be a manifest of all the useful things I’ve picked up over the years. But time will tell if time permits such niceties.

Gatsby let’s you commit content into source control which you to create locally thus having and singular state. I like the sound of a simple and robust solution to create content for a static site. How this could be leveraged to perhaps integrate e-commerce I’ll have to investigate.